The six-storey Class A tower, when complete in 2020, will be steps to transit in the tech-friendly Innovation District

A 10-minute walk is all that separates the current law offices of Gowling WLG from its future address in what will be the city’s first new downtown office building in 25 years.

But even a short-distance move holds long-term implications for the law firm – and the city.

By relocating to the heart of downtown Kitchener in 2020, Gowling aims to raise its profile and capitalize on the proximity to new transit, high-rise condos and commercial property construction.

After reviewing 12 potential sites, including the option of staying put, Gowlingchose a central presence in Kitchener’s recently branded Innovation District that encompasses several blocks on either side of King Street West.

“As an international law firm with offices around the world and the only international firm with a presence in Kitchener-Waterloo, we wanted to be at the centre of that locus [of transit and redevelopment activity],” says Bryce Kraeker, managing partner of Gowling’s Waterloo region office.

With construction set for next spring, the new building is four blocks from Google’s Canadian engineering offices and from the former Lang Tannery industrial space, which has been turned into a tech hub for a proliferation of startups.

For Gowling, transit explains much of the appeal of 345 King St. W. The building is steps from a new regional LRT line opening next year, three blocks from an existing Via Rail/GO Transit commuter station, and minutes from a future multi-modaltransit hub (with potential mixed-use development) that would complement an Ontario government-promised high-speed rail link between Toronto and Windsor, Ont., by 2025.

With growing collaboration between Gowling’s Waterloo and Toronto offices, observes Mr. Kraeker, “we needed to be within a short walking distance from the transit hub to maximize the benefits of integrating our offices at either end of the [Waterloo-Toronto] corridor.”

The city’s downtown is coming to life in other ways. 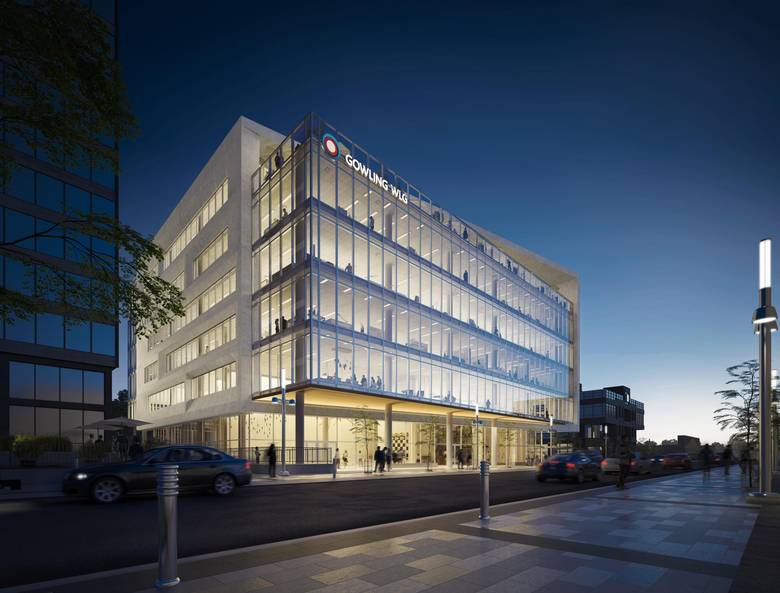 Over the next two-and-a-half years, private developers are expected to add 1,000 new apartments and 1,800 condo units, says Brian Bennett, manager of business development for Kitchener. In addition, he notes, an estimated 400,000-square-feet of new Class A LEED Gold office space is forecast to come on stream in the next three years – compared to none in the past 25 years save for a purpose-built expansion of Google’s brick-and-beam Breithaupt Block offices.

After a turn-of-the-century downturn that saw the loss of manufacturing, followed by a targeted city strategy to attract public and private reinvestment, Kitchener now projects office employment in the downtown, including the Innovation District, will rise to 18,500 by 2020, up from 11,600 in 2009.

“All roads lead back to talent,” says Perimeter partner Craig Beattie, of the downtown’s growing appeal as a live-work-play destination. He says prospective tenants tell him, “We need to be where the action is from a talent point of view.”

As a developer, Perimeter made a long-term bet on the King Street corridor, which now forms part of the route for the new LRT.

In 2010, with Allied Properties REIT, the developer began renovating the BreithauptBlock former auto parts plant that now houses Google. Later, Perimeter purchased a 1960s-era 12-storey modernist bank tower on King Street as a high-ceiling “cool” space for young companies and, in 2016, completed a makeover of the Victorian-era Walper Hotel as upscale boutique accommodation.

“Our intuition was always that, at some point, this market would evolve enough that there would be a market for a brand new Class A building,” says Mr. Beattie. “It is all a timing thing.”

A 40,000-square-foot private terrace, not part of the original design, steps the building back at the fifth storey and became a compelling factor in Gowling’sdecision to lease the top two floors. “Terracing is a trend you will see more of in offices,” predicts David Dow, a principal at Diamond Schmitt in charge of the project.

“Our goal when we first set out was to come out with a timeless building,” he says. The addition of the terrace, he adds, “will always help distinguish that building among others out there. It is future-proofing your project for the long haul.”

In the meantime, other big-name firms are returning to the core.

This month, Deloitte Canada is moving its regional office from a Kitchener suburb into a refurbished former industrial warehouse, a two-storey 28,000-square-foot “brick and beam” structure turned into a collaborative work space for tech-savvy employees. Like Gowling, the firm chose its new location for existing (and proposed) transit facilities two blocks away.

“We wanted to be near the transit hub,” says Peter Barr, managing partner of Deloitte’s Waterloo and western Ontario regional office. “The vision for our local practice as a significant national asset to our firm means that transit in and out of Toronto for our clients and our people will become very important.”

One of those keeping a close watch on the renewal of King Street is former Kitchener mayor Carl Zehr, who retired in 2014 after a 17-year run that spanned the disappearance of manufacturing jobs and the introduction of a city reinvestment strategy.

In the dark days, did he ever expect to see a new office building on King Street?

“It was difficult to imagine in terms of where the economy was at that time,” he says. “But it was one of those aspirational goals to have new construction. … It has been a long time since there was any purpose-built office towers.”